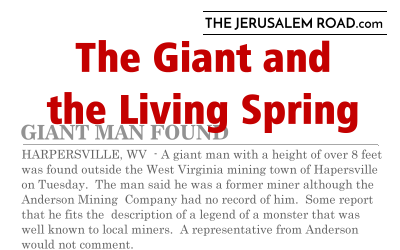 I woke up abruptly this morning with the image of a living spring in my mouth and in my lungs pouring out high into the air.

God is a great story teller. Forget those dime novels, New York Times best sellers, and even Hollywood and TV.  Over the years I have had the privilege to have the greatest story teller of them all teach me in my dreams by using amazing stories that include vivid characters and situations. It can be often like a story that goes for one or several nights and then switches to another channel or story with the first being continued and advanced a week or months later. Also an important fact is that “I” tend to be experiencing one of the characters, if not the main character, in the story, so I’m acting and walking the dream in real 3-D virtual reality mode.

I tell you this because this image I abruptly woke up to was from one of these stories that has lasted over 8 years, and oddly enough has not been brought back to my attention for several years until this morning. I will recount some of it here.

The story is of a gentle giant who was used as slave labor in a coal mine. Over the years, with modern technology, his mighty hands and power was no longer needed. He drifted into obscurity — responsibility for him falling through the cracks of the mining management. He ended up living down in the mines because that was the only home he knew of since he had grown up there. So as you can imagine, with the mine still in operation, there came stories from miner to miner of the legend of the giant that lived in the mine. Some miners would tell tales of sightings and then one day the giant became hunted, as to be killed.

The giant eventually escapes the mine, discovers the world outside, and begins a fascinating journey. Due to the fact that the giant was mocked and ridiculed in the towns his general path would take him more or less through deep wilderness areas. In this journey the giant is either alone, is being chased, or is meeting a series of unusual characters along his way, both human and others being talking animals or natural formations. One example of the natural formation was that the giant met a living spring that seemed to have a never ending supply of water that poured forth and that stood upright and could both walk and talk. The living spring was always encouraging to the giant and met him several times along his journey.

This is where we jump to this morning. The giant, in my dream this morning, was at the heightened peak of being chased by those who wished to either kill him, mock him, or control him. He was really tired and felt like giving up, then it was like a reunion of some of his best friends of those he met along the way came back to encourage him. But one friend in particular, the living spring character, did more than encourage him. The Living Spring said to the giant that if he could live in his mouth that the giant would live forever in peace. The giant, tired of being chased and used, seeking a better way said yes. At that time the standing pillar of water which moved and talked then jumped into the giant’s mouth. The giant had to adjust to this water in his mouth, for he could not talk and still contain the water, nor could he swallow and had to breathe through his nose. A few moments later the living spring moved into his lungs. He began to panic as it felt like he was drowning. But he remembered the words of the living spring and gave up his will, trusting in the promise of what the living spring had said. There was a point at which, while feeling like you are drowning, that the water entirely fills the lungs. Your eyes bulge out, you’re in a panic because you are losing control, and your hands flare out. You know you’ve never done this before and you feel like you just might die. Then — it was done. The living spring totally occupied the giant’s lungs and he began to breathe heavily, but breath he did. He knew in his mind that the living spring would give him life and sustain him but now he was experiencing it for real. He had no idea that you could actually breathe water, but he trusted. For this water was no ordinary water it was full of life and it sustained the giant just as living spring had said.

Interesting enough, there is a deep sea diving technology that allows a man to go deeper into the sea that ever before while breathing liquid oxygen in his lungs. While in transition from air to the fluid they do have the sensation of drowning but soon breathe the fluid oxygen. Since this fluid is denser than air, they breathe more heavily but it is also in this way that they can go deeper into the ocean without being as effected by the extreme deep sea pressures. The U.S. Military started to pioneer this technology in the 1960s and the actual depths in the ocean that a man can go to while using this breathing system is still classified to this day.

The Fluid Breathing System is an advance technology that enables man to explore the farthest depths of the ocean, unencumbered by the need for pressurized cabins in underwater craft. By filling the lungs with a special fluid, the human body is no longer limited by its ability to withstand the pressure of the deep. 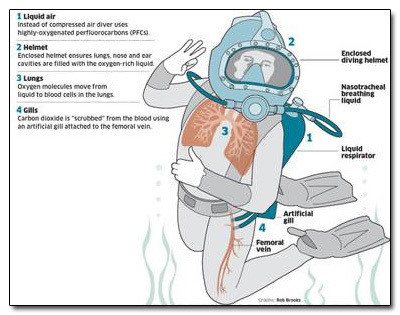 John 7:37-38:  “In the last day, that great day of the feast (of Tabernacles), Jesus stood and cried, saying, ‘If any man thirst, let him come unto me, and drink.  He that believes on me, as the scripture has said, out of his belly shall flow rivers of living water.’”