HOME > Notes From The Road > The Real Mount Sinai 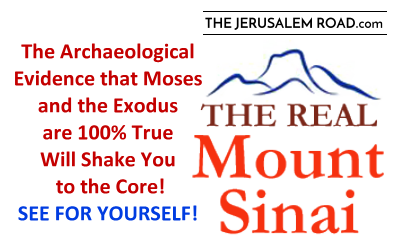 Did you know that the Mount Sinai on everybody’s Bible maps, located in Egypt’s Sinai Peninsula does not match Scripture?!  Why not?  An easy answer that Roman Emperor Constantine’s mother selected that mountain on advice from her spiritualist.  Well, go figure!

About 80 miles or 130km east of the traditional Mount Sinai site there is an archaeological site that perfectly fits the Bible descriptions of Mount Sinai.  Many scholars, especially secular ones, look at the traditional site of Mount Sinai and conclude that Moses and the Exodus is a nice story but not real.  That it was created by ancient Israelis holy men to teach religious principles but is not a historical account of what happened.  Well, they were wrong!  But how do I know?  I’ve seen the evidence for myself!  First, Saudi Arabia is where the mountain is located.  Second, Saudi Arabia is a closed country – anyone can’t just visit.  The knowledge of this site has been kept secret until recent years.  All I can say is this one will knock your socks off!  I was fortunate to be a part of the founding of the Split Rock Research Foundation led by Jim and Penny Caldwell.  Check out the Caldwell family story on their website.  At one time the Caldwell family lived and worked in the oil industry in Saudi Arabia, and had access to explore and document the real Mount Sinai area more than any other westerner.

HOME > Notes From The Road > The Real Mount Sinai