HOME > Notes From The Road > What is Adultery? Adultery is Rebellion. 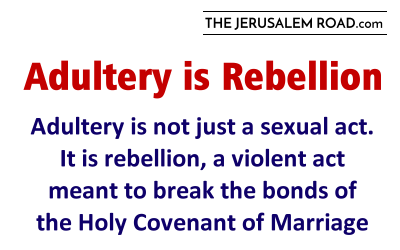 Adultery is not just a sexual act.  It is rebellion, a heart or attitude of violence meant to break the bonds of the Holy Covenant of Marriage.  Even at the core of the sexual act is a rebellious heart. Having a rebellious heart in a marriage lays the foundation to its destruction.  Whether it is rebellion against God or his standards for marriage or a wife that rebels against her husband, her head/authority – the rebellious heart plants seeds of destruction that may bear its fruit quickly or not be seen for years.  Unless rebellion is addressed quickly, you will spend more time undoing the damage than living in a healthy relationship.   This can be directly seen in God’s relationship with Israel.

The issue of rebellion can be directly seen in God’s relationship with Israel.  Much of the Old Testament is full of the accounts of rebellious Israel who refused to obey God and even went so far as to worship pagan gods and idols in the Holy Temple.  Israel split into the northern kingdom (House of Israel) and the southern (House of Judah).  God said both Houses were acting like a whore, “sleeping around” with other gods – committing adultery (rebellion).  It was because the House of Israel’s consistent, blatant, and outright disobedience (adultery) that God divorced them.

I will expand this study in the future, here is a summary.

WHAT IS ADULTERY, FORNICATION?

Fornication generally means “illegal sexual activity” according to the Bible, God’s Laws.  A good starting point to read is Leviticus chapter 18.  Illegal sex includes sex with your father, sex with a son, sex with your aunt, mother, or any other close relative it includes homosexual acts.  Fornication includes Adultery.  Adultery broadly means any act that works to break or dissolve the marriage bonds: could be an outside person who interferes, a spouse who rebels against God’s order to Marriage, a spouse who abuses the other worst than a slave, and the classical understanding – any sex outside of the marriage.

God’s relationship with us is the model for Marriage.  See Ephesians 5:22-33.  God is our husband and we are his wife (the Body of Messiah).  God often had difficulties with the harlot House of Israel and the harlot House of Judah – both committing adultery many times.  In Jeremiah 3:8, we see God divorced the House of Israel for adultery and even though God said Judah did the same, he did not divorce her.  In a brief discussion of what actually is adultery – things get broader beyond the actual sexual act.  Adultery in many aspects is referred to serving another authority than your husband.  That authority can be obeying yourself or someone else about your marriage that steers you away from Scripture.

In studying what adultery actually means in the context of God’s relationship with Israel, it becomes more defined as removing God – the husband – as your head/leader, continued disobedience, rebellion, and/or disrespect of your husband.  In the case of God and the Houses of Judah, they brought in pagan idols and served them instead of God.  With the House of Israel they did the same but included much more outright and consistent disobedience than Judah.  Maybe that is why God only divorced the House of Israel – for consistent, blatant, and outright rebellion.

BREAKING THE BONDS OF MARRIAGE
So in my studies, I have started to see a recurring theme.  That when you disobey God, disrespect him, listen to and obey others besides your husband, you are in fact committing an act of harlotry, adultery.  It is the same with an earthly husband.  Women who do the same are breaking away – removing their covering, authority from over themselves and, as some Scripture calls it, they become naked, without a covering over them.  See ‛ervâh[H6172] in Deuteronomy 24:1 which is translated as uncleanness – but I believe reveals the true Biblical standard for legal divorce can only be if a wife removes the husband as their authority, covering, and thus become “naked” [H6172] or if the husband makes his wife naked – without his covering – causes her to live outside the Biblical standards of marriage.

PHYSICAL ABUSE.  God gives us Laws in the Bible by which we are suppose to treat each other. When a man or woman steps outside those laws and treats their spouse in a manner not even allowed for someone to treat a slave – then that act has also broken the bonds of marriage – ADULTERY.

HOME > Notes From The Road > What is Adultery? Adultery is Rebellion.