HOME > Identify Yourself! Who Are You?

QUESTION:  As a disciple of Jesus (Y'shua), what do we call ourselves now that we believe and follow Torah? I was asked if I was Jewish because I keep Sabbath. I feel I am neither Jewish nor Christian. And I don't feel like I can really be part of the Christian crowd anymore.

REMEMBER... WE ARE ISRAEL!

We are beholding only to God. Don't get so stuck with terminology to our identity except to as the God of Israel views us: ISRAEL

[ See Also: Who Are We?  The Church or Israel? The Answer is YES! ]
The term 'Messianic' in its general use just means 'of the Messiah of Israel.'  Acts 11:26 states they were 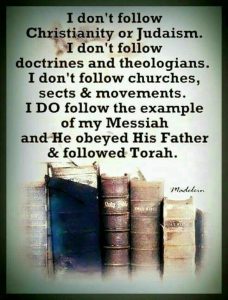 first called 'Christians' (Greek) but more accurately would be "Messianic" (Hebrew origin) - both meaning 'of the Anointed One'. In the Greek and Roman pagan world there are hundreds of gods or 'anointed ones' but in the Hebrew culture there is only one main 'Anointed One' - the Messiah of Israel.
Unfortunately to outsiders they think "Messianic" means you are Jewish or follow Messianic Judaism which is misleading. But I still use it sometimes.
Many people use the term 'Hebrew' or 'Hebrew Christian' or "Hebrew Roots."
Some use the 'Natsarim' or 'Nazarene' [Acts 24:5] or Followers of "The Way" [Acts 9:2] or others just say "Whole Bible Believers" (which I think is a cool way to put it.)
I think IT IS IMPORTANT to communicate that we are Torah-Observant Followers or Disciples of the Messiah. That we are saved by our Faith alone in Messiah and that we live our daily lives (Our Walk) as Torah-Observant or 'obedient to the commandments of God in the OLD and NEW TESTAMENTS.
WHAT I NORMALLY SAY:
I follow the Original Gospel and Teachings of the Messiah, Apostles, and Early Church, the Jerusalem Church.
You must understand that The Early Church was Torah observant for over 400 years. So I more identify myself with The Jerusalem Church (the first church and Headquarters of the Apostles and the Early Church).
It was the Roman Catholic Church that started persecuting the Early Church and taking them over that ended their expansion around the years 300 to 400. The Catholic Church continued to murder tens of millions of Bible-only believers over the centuries who would not bow to the authority of the Pope but would only bow to the authority of God and Scripture.
So there is a clear distinction between the Roman Catholic Church with its pagan ways and the original church at Jerusalem. You have to remember that Rome was the pagan Capital of the World in worshiping hundreds of gods so it makes sense why the foundation to Catholicism and Protestantism are corrupted to their core and foundation. This is why I suggest identifying ourselves instead with the Early Church and/or The Jerusalem Church because we are actually following in their footsteps (of the Apostles) by Faith in the Messiah and Torah observance as the foundation to every disciples walk.
HAVE QUESTIONS or SOMETHING TO ADD?
E-Mail the Editor:  Editor@TheJerusalemRoad.com
HOME > Identify Yourself! Who Are You?