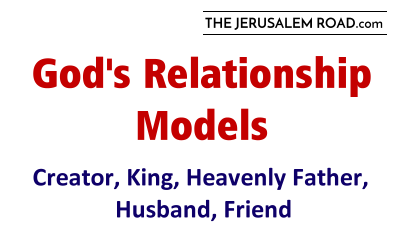 If one studies and learns from these relationship models, one will start to learn more about how God wants to relate with us and us with him.   There are five key relationship models that are emphasized in the Scripture:  First, God as our Creator.  Second, God as our King, Boss, or Master and us as his kingdom servants, subjects or citizens.  Third, being the primary one, God as our Heavenly Father and us as his children.  The fourth one is referred to as a secret, intimate, and mysterious part of our relationship – that is God as our Husband and us, the Church, as God’s wife or bride.  Fifth is God as our Friend.

First, God is a Real Person

God has real feelings and emotions like us.  When we relate to him and talk with him we need to view him as a real person, but be even more respectful because he is God.  In failing to do so, we will miss out on having a relationship with him that is deeper, more real, and more full of truth and understanding.

God as Creator and King

Put simply, God is the creator and king of the universe.  God’s Kingdom is referred to as the Kingdom of Heaven because God’s throne room is in heaven but his kingdom spans the entire universe.  In the universe God has an established authority structure, rules, and covenants that govern all things including people, society, business, families, animals, physics and gravity, even the stars and planets.

All things seen and unseen in the universe were created by God and have their existence in and operate under God’s Word, his Laws and Covenants (Jeremiah 33:25).   Disregarding God’s law of gravity, say in stepping off a roof, will cause you damage.  Likewise, disregarding or breaking God’s laws in other areas will bring various punishments and/or negative consequences.  No matter where you go you cannot escape God’s Laws and the reach of his Covenants.  They are in effect throughout the entire universe, even in the very fabric and framework of the seen and unseen world.

God as Our Heavenly Father

God’s primary relationship with us is as our Heavenly Father.  God is a true father in the best sense:  He know us better than anyone and has a perfect plan for us that is meant give us nothing but the best in life and as a good father does, he seeks to raise up his children in that plan.  God our Father is our protector, our provider, our teacher, our leader – God our  Father is our role-model.  Wow!  If we would realize what that really means!  In John 5:30, Jesus (Y’shua) said:

God as our Friend

God is also referred to as a friend.  Here are a few scriptures that highlight this:

In John 15:13-15, Jesus (Y’shua) says:  “Greater love has no man than this, that a man lay down his life for his friends.  You are my friends, if you do whatsoever I command you.  Henceforth I call you not servants; for the servant knows not what his lord does: but I have called you friends; for all things that I have heard of my Father I have made known unto you.”

And in James 2:21-24, James states:  “Was not Abraham our father justified by works, when he had offered Isaac his son upon the altar?  (22)  See how faith works together with his works, and by works was faith made perfect?  (23)  And the scripture was fulfilled which says, Abraham believed God, and it was imputed unto him for righteousness: and he was called the Friend of God.  (24)  You see then how that by works a man is justified, and not by faith only.”

God as our Husband 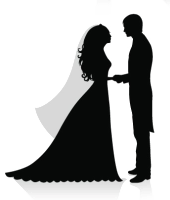 This is considered a more hidden or great mystery side to God.  It is a very, very intimate side to God that puts it closer in the realm of a marriage covenant relationship.  This topic is too deep to discuss in detail here but you will see the Covenant Marriage mentioned as a main and recurring theme throughout this book.  To start your study, read Paul’s teaching on the Marriage Relationship Model in Ephesians 5:22-33, then read the “We Are The Body of God.”