HOME > Featured Studies > The Mark of Jesus (Y’shua) in the Old Testament: the Aleph Tav (Alpha and Omega)

Introduction to the את Aleph Tav

First, let’s be clear: This IS NOT about Messianic prophecies about Jesus (Y’shua) found in the Old Testament.  We are talking about an actual two letter Hebrew Mark of Jesus (Y’shua) written over 9,500 times into the Old Testament that remains untranslated or mistranslated in most, if not all Bibles, especially all English translations.  You may have never heard of this before, although it was well known to the Early Church, it has been a mostly lost revelation until recent years.

You may have heard the saying, “I am Alpha and Omega, the beginning and the end.” which comes from Revelation 21:6 and Revelation 22:13.

In the Greek language the ‘Alpha’ is the first letter and the ‘Omega’ is the last letter in the Greek alphabet.  This reference shows up in the book of Revelation, given to us by John.  Since both Jesus (Y’shua) and John were Jews, they would have used the first and last letters in Hebrew or Aramaic which in both are: (reading right-to-left) את the “Aleph and Tav.”

Bible translators view these two letters as an undefined grammatical mark and either don’t translate it or substitute whatever fits in the sentence for it.  Jewish scholars recognize a great mystery that the Aleph and Tav is actually a person.  Does this show up anywhere in the Bible? YES! The Aleph Tav mark of Jesus (Y’shua) also shows up over 9,500 times throughout the Old Testament.

In the Creation Week

In Genesis 1:1 there is an untranslated portion that shows up in the original Hebrew but not in our English Bible translations.

Genesis 1:1:   “In the beginning God created the heaven and the earth.”

Genesis 1:1 in the original Hebrew:

Best translated as:  In the beginning God Jesus (Y’shua) created the heaven and the earth.

In Genesis, the Aleph Tav Mark continues to show up throughout the entire creation week and next to the words ‘made” or ‘create’ every time they are used, meaning God created all through Jesus (Y’shua).   Just as John reveals in John 1:3:  “All things were made by him (Jesus/Y’shua) …”

When no one has seen nor heard the Father and the Holy Spirit is spirit (unseen)…. Who was it then that gave the law and spoke the 10 Commandments at Mount Sinai? Also, who was it who physically walked in the Garden of Eden with Adam and Eve?

Who do you say Jesus (Y’shua) is now?

This revelation and much, much more is what is in store for you with the Messianic Aleph Tav Scriptures (MATS), which is a translation that restores over 9,500 Aleph Tav Marks throughout the Old Testament.  The Aleph Tav revelation has been lost over the centuries.  While it was well known to the Early Churches it is just now becoming known again in recent years.  It is like we are coming out of a dark age. 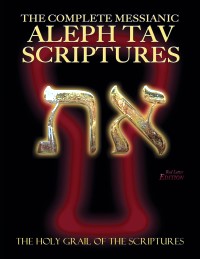 Great Videos on the Aleph Tav

HOME > Featured Studies > The Mark of Jesus (Y’shua) in the Old Testament: the Aleph Tav (Alpha and Omega)