HOME > Featured Studies > The Sabbath – Who Changed It from Saturday to Sunday and Why?

Who Changed the Sabbath Observance?

Who Changed the Times and Laws of God? 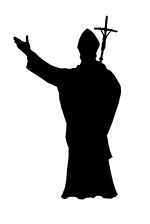 Daniel 7:25-26 foretells of the Fourth Beast, which many consider to be the Roman Empire and also its successor the Roman Catholic Church:   “And he (the beast) shall speak great words against the most High, and shall wear out the saints of the most High, and think to change times and laws: and they shall be given into his hand until a time … But the judgment shall sit, and they shall take away his dominion, to consume and to destroy it unto the end.”

During the times of the Early Church, Rome was the pagan capitol of the world, having hundreds gods that were worshiped.  The sun god, being commonly worshiped above all others throughout the Empire, was their main god.  In the year 321, the Roman Emperor Constantine I, a sun god worshiper, enacted the first Sunday Law:

“On the venerable Day of the Sun let the magistrates and people residing in cities rest, and let all workshops be closed.”

Chamber’s Encyclopedia: “Unquestionably the first law, either ecclesiastical or civil, by which the Sabbatical (Sunday) observance of that Day is known to have been ordained, is the edict of Constantine, 321 A.D.”

“The Sun was universally celebrated as the invincible guide and protector of Constantine.”
— Edward Gibbon, The history of the decline and fall of the Roman Empire Volume 3 (London: 1838): 237. 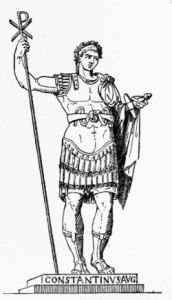 “When Constantine came upon the stage of action, he accepted Christianity as he found it, without renouncing his pagan theories, and from this confusion of Christian doctrines with pagan superstitions, the papacy was in due time developed. Church historians relate how that in the fourth century (300s AD), the conformity of the Church to pagan practices so increased that the simplicity of Christian worship had been almost wholly lost sight of.  … one would pronounce the prevailing religion, Christianized paganism.”
–  Facts for the Times, 4th Ed (1893), Review and Herald Publishing Company, Battle Creek, Michigan.

“The (Catholic) Church made a sacred day of Sunday…largely because it was the weekly festival of the sun; for it was a definite Christian policy to take over the pagan festivals endeared to the people by tradition, and to give them a Christian significance.”
–  The Paganism in Our Christianity by Arthur Weigall (1928) page 145, Putnam’s Sons, New York. 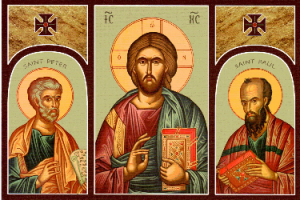 Notice the sun god “halo” behind the heads of Jesus (Y’shua), Peter, and Paul in this Catholic inspired painting.  The Roman Catholic Church is famous for incorporating pagan culture and symbols into their form of Christianity.

Over time many factors and pressures began to influence the Early Church, from increased opposition in the Jewish synagogues, to pagan influences, to anti-Semitism, and civil persecution like the Jewish Tax.

After the first Roman-Jewish War of 66–73 AD, in which the Temple in Jerusalem was destroyed in 70 AD, Rome imposed across the Empire a “Jewish Tax” on anyone that followed the customs of the Jews, including those who observed the Sabbath.  This lasted, by some accounts for almost a hundred years, others say into the mid 300s.

Pagan influence over the Early Church had begun to take its toll compromising doctrines as early as the end of the first century, but was mainly centered at Rome.  By the year 363, the original church at Rome had been totally taken over and corrupted by the political and pagan religious establishment of Rome.  So different from the Original Faith and teachings of the Early Church, came the rise of an alternate Gospel, backed by the might of the pagan Roman Empire and its practice of conquer all opponents, now promoting itself as the only way.  Many mark the year 363 as the beginning of the end of the Early Church and its observance of God’s Sabbath replacing it with the observance of the pagan day of worship, Sun-day.

In 363 A.D., the Roman Catholic Council of Laodicea passed the following decree:

“Christians must not judaize by resting on the Sabbath, but must work on that day, resting rather on Sunday. But if any man be found to be judaizing, let them be anathema (accursed or excommunicated) from Christ.”  –  Percival Translation, Canon 29.

By 363, the Roman Catholic Church obviously felt there was a significant number of early Christians still observing the 7th Day Sabbath that they needed to pass this decree.

“The observance of the seventh-day Sabbath did not cease till it was abolished after the (Roman) empire became Christian”  –  American Presbyterian Board of Publication, Tract No. 118.

[ READ NEXT: Roman Catholic and Other Church Quotes About the Sabbath ]

HOME > Featured Studies > The Sabbath – Who Changed It from Saturday to Sunday and Why?