HOME > Featured Studies > The Sabbath – Wasn’t it Changed from Saturday to Sunday? 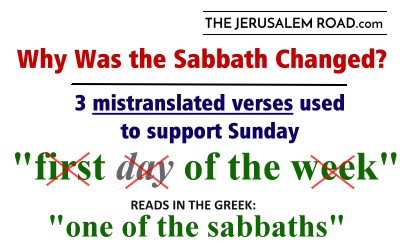 BUT wasn’t the Sabbath changed from Saturday to Sunday?

No command or instruction was ever given anywhere in the Bible that we should not observe the 7th Day Sabbath of God, or that it was changed, modified, or moved in any way.  Some attribute to Paul about a few gatherings on the first day but nowhere did Paul ever contradict the Sabbath Commandment.  If Paul did teach the Sabbath was changed from the 7th to the 1st day then he would be a false teacher.  Why?  Because that would contradict God’s Word and a direct command by God’s own audible voice in giving the 10 Commandments.  Who do you believe: God or Paul?  Or are people misinterpreting or abusing Paul’s words?  Which is more likely?

“It will surely be far safer to observe the seventh day, according to express commandment of God, than on the authority of mere human conjecture to adopt the first.” — John Milton (1608-1674), author of Paradise Lost.  Quoted from Sabbath Literature by John Milton

Jesus (Y’shua) is the Lord of the Sabbath so what day would you think is the real “Lord’s Day?”  Many Catholics and Protestants refer to Sunday as “The Lord’s Day” and observe it as their day of worship, referencing that Jesus (Y’shua) arose from the dead on the 1st day.  Some referred to as First-Day Sabbatarians, call Sunday the Sabbath and observe varying degrees of the Sabbath laws.  Others like the Roman Catholic Church clearly acknowledge that God’s Sabbath is the 7th day but state their church has decreed (Catholic Law) that they should observe Sunday as their day of worship. Catholics even mock “Bible Believing” Christians calling them hypocrites because, they say, no where in the Bible does it support Sunday as the Sabbath or day of worship.  They laugh calling non-Catholic ‘Sunday worshipers” obedient to the “mother church.”

Protestants and Catholics, in supporting their Sunday argument point to the following four scriptures listed.  They are only four verses that appear to mention the Lord’s Day or the first day in the New Testament that are also used in conjunction with a gathering.  So all it takes is four verses to overthrow a verbal command by God’s own voice in the 10 Commandments to observe his 7th Day Sabbath.  Many who oppose God’s Sabbath also thrown out the observance of the Old Testament Laws that God commands, minus their own particular favorites.

(#2) John 20:19, (#3) 1 Corinthians 16:1-2, and (#4) Acts 20:7 are the remaining verses some use to support first day observance.  In all three verses, the original Greek does not even mention the ‘first day of the week.’  In the King James Bible this is a huge translation error which newer Bible translations have also adopted.  Simple use of a Strong’s Concordance reveals the original Greek showing us what these verses really say.  It is critical to translate the words literally as to not change the Word of God rather than change the words to fit any view.

The word ‘day’ is not in the original Greek manuscript because it is italicized and gray in the King James Bible, this denotes that is was added by the translators.[1]

The Greek word used for ‘week’ in the following verses is ‘sabbaton’ (Strong’s Ref. #G4521) which means Sabbath not week.

To understand what the meaning to “one of the Sabbaths” is, we should first take it as it states, a weekly 7th day Sabbath.  Second, as outlined in Leviticus 23:15-16, this should be viewed in the Biblical context of the counting of seven Sabbaths (49 days) from the Feast of Unleavened Bread, which leads up to the day after the 7th Sabbath, the 50th day called the Feast of Weeks, Shavout, or Pentecost.  Pente means 50 in Greek.  Shavout remembers the giving of the 10 Commandments and this same day the Holy Spirit was later given to place the law on our hearts. To dig deeper, the Biblical Holidays are outlined in Leviticus Chapter 23.

(#4) Acts 20:7 (KJV):  “And upon the one [first] [day] of the [week] Sabbaths[G4521], when the disciples came together to break bread, Paul preached unto them, ready to depart on the morrow; and continued his speech until midnight.” In this context it could be better translated as “one of the Sabbaths.”

The previous verse mentions the Feast of Unleavened Bread in Acts 20:6 (KJV):  “And we sailed away from Philippi after the days of unleavened bread, and came unto them to Troas in five days; where we abode seven days.”

In John Chapter 20 below, to see correctly, we must understand that the Crucifixion and Resurrection happened in the same time period as the Passover and Feast of Unleavened Bread.

FOOTNOTE:
[1] Found in the front of early King James Version Bible are the translator’s notes.  These mention that gray and italicized words do not show up in the original manuscripts but are inserted by the translators only to help the verse read better.  I should also mention that words and phrases in ( ) brackets are not scripture either but are pure commentary by the KJV translators trying to help explain a verse.  In following tradition, modern translators of newer translations of the Bible have had a very bad habit of including these additional words as actual scripture without noting the source is actually the translators of the King James Bible.  So if you use a modern translation it is good to reference the KJV.

HOME > Featured Studies > The Sabbath – Wasn’t it Changed from Saturday to Sunday?