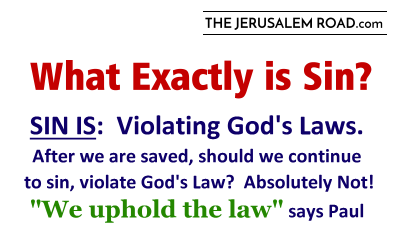 Sin is a Violation of God’s Law

In 1 John 3:2-7, John writes:  “… but we know that, when he (Jesus/Y’shua) shall appear, we shall be like him; for we shall see him as he is.  (3)  And every man that has this hope in him purifies himself, even as he is pure.  (4)  Whosoever commits sin transgress also the law (Torah): for sin is the transgression of the law (Torah).  (5)  And you know that he (Jesus/Y’shua) was manifested to take away our sins; and in him is no sin.  (6)  Whosoever abides (lives) in him sins not: whosoever sins has not seen him, neither known him.  (7)  Little children, let no man deceive you: he that does righteousness is righteous, even as he is righteous.”

Sin, generally translated, means to miss the mark, to offend, or an offense.  You can offend or sin against yourself (abuse your body), sin against another person, and sin against God.  God has established basic rules that govern all relationships.  When you violate those rules with that person you step out of fellowship with them and become alienated from them.  So every time we break God’s laws we offend or sin against him and break fellowship.  Sin is generally defined as an offense against someone.  Sinning against God is outlined as he defines it in his laws and commandments in Bible, while the term ‘iniquity’ more specifically means a violation, illegality, or lawlessness concerning God’s Laws.

In 2 Timothy 2:19, Paul writes:
“Let everyone  that names the name of Christ depart from iniquity (violation of God’s Laws).”

In 1 John 3:22, John writes:
“And whatsoever we ask, we receive of God, because we keep his commandments, and do those things that are pleasing in his sight.”

In 1 Peter 3:12, Peter writes:
“For the eyes of the Lord are over the righteous, and his ears are open unto their prayers: but the face of the Lord is against them that do evil.”

In Titus 1:16, Paul states:  “They profess that they know God; but in works they deny him, being … disobedient, and unto every good work worthless.”

Prayers of a Rebellious,
Snot-Nosed Child

You’ve seen them or been one.  A child who stomps their feet and throws a temper tantrum when they don’t get their way.  A true loving father knows not reward rebellious children, but disciplines them.  If sin is bondage, then the Law of God is Freedom (Psalm 119:44-45), because breaking the Law of God is sin (1 John 3:4).  Obedience to God is freedom and love, it is the way we please God.

Isaiah 59:1-2:   “Behold, י ה ו ה the LORD’S hand is not shortened, that it cannot save; neither his ear heavy, that it cannot hear:  But your iniquities (transgressions against the law) have separated between you and your God, and your sins have hid his face from you, that he will not hear.”

In Jeremiah 5:25, God states that he want to bless us BUT  “your sins have withheld good things from you.”

Proverbs 28:9:   “He that turns away his ear from hearing the law (Torah), even his prayer shall be an abomination.”

Isaiah 24:5:   “The earth also is defiled under the inhabitants thereof; because they have transgressed the laws (Torah), changed the ordinance (of God), broken the everlasting covenant.”

There is Freedom from Sin!

You’ve heard it said we have “Freedom in Jesus (Y’shua),” but what exactly does that mean?  Do we have freedom to go out and murder someone?  Of course not!  This freedom does not give us a license to sin.  Our freedom is that we don’t have to be trapped in Sin and Evil.  That is, we can now obey God and his laws through the power of walking in the Spirit of God who resides inside of us.  Before we were trapped, having a carnal mind and being without the Holy Spirit, we were not fully capable of obeying and pleasing God, but now we are free from the control of sin (that leads to death) and now having the Faith of Jesus (Y’shua), we can now be unified with God (who is eternal life).

Sin brings thoughts of being bogged down on a very muddy road, easily getting stuck over and over again, not being able to easily get out.  Regardless of how it degrades one’s relationship with God, family, or friends, Sin brings nothing but destruction, confusion, and chaos to one’s own personal life.

One of the most amazing understandings in my early walk with Jesus (Y’shua) was that: I did not have to sin!  I was now free from the control of sin, that with the help of God and his Spirit living within me, I could indeed rise out of the muck and muddy road to rise to a better and more peaceful and abundant life.

To whom you yield yourself to obey, they are your master.  So do not let anything or anyone besides God ever become master over you, including sin.

Paul talks about sin and grace in Romans chapter 6:

(11)   “Likewise reckon … yourselves to be dead indeed unto sin, but alive unto God through Jesus Christ our Lord.  (12)  Let not sin therefore reign in your mortal body…  (14)  For sin shall not have dominion over you: for you are not under the (penalty of the) law (Torah)(Torah), but under grace.  (15)  What then? shall we sin, because we are not under the (penalty of the) law (Torah), but under grace? God forbid.  (16)  Know you not, that to whom you yield yourselves servants to obey, his servants you are … whether of sin unto death, or of obedience unto righteousness?”

(22)  “But now being made free from sin, and become servants to God, you have your fruit unto holiness, and the end everlasting life.  (23)  For the wages of sin is death; but  the gift of God is eternal life through Jesus Christ our Lord.”

We can choose to not let sin reign in our mortal bodies any longer, to not let sin control us or be master over us, to live a holy life in the full power of God.

In the Gospels, it states God the Father has given Jesus (Y’shua) the authority over judgment and that when Jesus (Y’shua) returns he will issue his judgments on what is often called the Day of the Lord or Judgment Day.  But it appears that until that time Jesus has held off on his condemnation for the sake of bringing more to salvation.

In John 12:47-48, Jesus (Y’shua) said:  “If anyone hears my words and does not keep them, I do not judge him; for I did not come to judge the world but to save the world. The one who rejects me and does not receive my words has a judge; the word that I have spoken will judge him on the last day.”

(16)  For God so loved the world, that he gave his only begotten Son, that whosoever believes in him should not perish, but have everlasting life.

(17)  For God sent not his Son into the world to condemn the world; but that the world through him might be saved.

2 Corinthians 5:18-19, Paul writes that God “has reconciled us to himself by Jesus Christ, and has given to us the ministry of reconciliation;  To wit, that God was in Christ, reconciling the world unto himself, not imputing their trespasses unto them; and had committed unto us the word of reconciliation.” 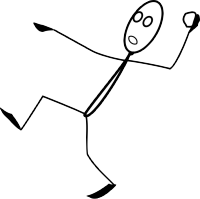 So as to question about stoning or capital punishment offenses in the Bible for violation of some of God’s key laws, it is clear in the verses above and also the ones below, that all judgement is in Jesus’ (Y’shua) hands, not ours, and Jesus (Y’shua) is not imposing judgment now but is waiting until Judgment Day.  Some may differ if capital punishment for murder is a delayed judgment also.  Capital punishment for a man or animal that murders a human is found in the Covenant made with Noah in Genesis Chapter 9.

In Luke 9:54-56, Jesus (Y’shua) responds to James and John after a village rejects their ministry:

“And when his disciples James and John saw this, they said, Lord, would you that we command fire to come down from heaven, and consume them, even as Elijah did?  But he turned, and rebuked them, and said, ‘You know not what manner of spirit you are of.  For the Son of man is not come to destroy men’s lives, but to save them.  …’”

“(14)  Afterward Jesus found him (someone he healed) in the temple, and said unto him, Behold, you are made whole: sin no more, lest a worse thing come unto you.”

“(22)  For the Father judges no man, but has committed all judgment unto the Son:  (23)  That all men should honor the Son, even as they honor the Father. He that honors not the Son honors not the Father which has sent him.  (24)  Truly, truly, I say unto you, He that hears my word, and believes on him that sent me, has everlasting life, and shall not come into condemnation; but is passed from death unto life.  (25)  Truly, truly, I say unto you, The hour is coming, and now is, when the dead shall hear the voice of the Son of God: and they that hear shall live.  (26)  For as the Father has life in himself; so has he given to the Son to have life in himself;  (27)  And has given him authority to execute judgment also, because he is the Son of man.  (28)  Marvel not at this: for the hour is coming, in the which all that are in the graves shall hear his voice,  (29)  And shall come forth; they that have done good, unto the resurrection of life; and they that have done evil, unto the resurrection of damnation.”