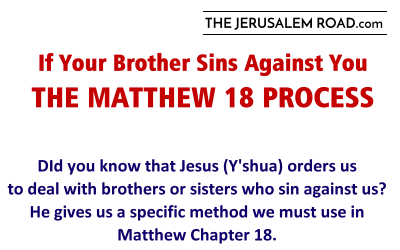 The Matthew 18 Process
What Jesus (Y’shua) says to do when a brother or sister sins against you.

Nobody likes to be around or purposely enter into a situation of conflict and turmoil, or an environment of ill-will and hurt feelings. But the scripture in Matthew 18, out of Jesus’ (Y’shua) own mouth, commands us to confront our brothers and sisters when they sin against us and to try to win them over.  BUT there is a specific Biblically commanded process, I call it the Matthew 18 Process.

Jesus (Y’shua) commands us in Matthew 18:15-17:  “… if your brother shall sin against you, go and tell him his fault between you and him alone: if he shall hear you, you have gained back your brother.  (16)  But if he will not hear you, then take with you one or two more, that in the mouth of two or three witnesses every word may be established.  (17)  And if he shall refuse to hear them, tell it unto the church (congregation): but if he refuses to hear the church (congregation), let him be unto you as a heathen man and a publican (tax collector).”

(1) Go to your brother or sister privately  – if you fail to win them over, then step 2

(2) Take a few others to witness your charges
Note: These are not witnesses of the sin but of the confrontation.
– if you fail to win them over, then step 3

(3) Take it before the entire congregation
– if you fail to win them over, then step 4

(4) Shun Them (don’t talk to them) and treat them like a tax collector, avoiding them at all costs.

Jesus (Y’shua) is quite clear.  To be obedient to him, we must overcome our natural distaste for conflict and avoidance of such situations.  Remember, we are not choosing ‘conflict’ but rather we are choosing to be obedient to Jesus’ (Y’shua) commands in dealing with that conflict.

If you look deeply into this you will find that the Matthew 18 Process is, in fact, The Body of God’s way of healing itself, becoming more perfect and healthy.  Unfortunately, if we choose our natural instincts to avoid the Matthew 18 Process we will never be able to be used by Jesus in this perfecting process.

Please note also that the Scripture does not say if you find sin in your brother, for there is only one who is without sin, but it says that if your brother sins against you.  So the Matthew 18 Process is clearly a conflict resolution process between brothers and sisters.

We are not to confront each other in an angrily, hateful, or condemning way, on the contrary, we are supposed to have a long-suffering, patient, motherly type of approach with each other. This is all meant to lovingly and kindly nurture each other while lovingly and gently exposing your brother’s faults to the light of the Truth out of the scripture. The difference is the motivation. Whether we are acting out of love and produce health or are acting out of anger, selfishness, or pride and produce destruction.

Jesus (Y’shua) commands all believers to deal with sins committed against them by another brother or sister using the Matthew 18 Process.  Discussing the offense outside of the Matthew 18 Process, except in gaining council, is not allowed and is a serious sin because it is the spreading of unfounded rumors and gossip.  If that situation became known to others through idle talk, that may now be a cause for a disciplinary action against the one who was originally sinned against.  So be careful about idle talk!